Getting on the Water: Where are They Now?

A new section of our blog is to highlight where Warrior Sailing graduates are now. Our training camps are just the starting point to the world of sailing. Check out what these graduates have done with their sailing skills. 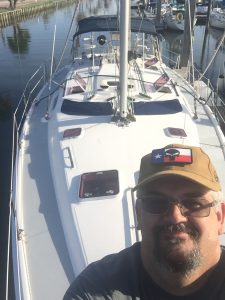 No way of holding James back!

Since attending the Warrior Sailing program class in June at San Diego Yacht club, James Cantu went back to the Gulf Coast of Texas and attended 3 ASA classes, 101, 103 and 104, and skipper skills building class. Plus, in late August, he will be attending the ASA 105 course.

When James came to the camp, he wanted to learn sailing to spend more time with his family. He has taken his family sailing on a Colgate 26. They then went on a family cruise on a Hunter 466 from Kemah to Galveston TX, out in the Gulf of Mexico and back on a 3 day and night trip. He plans to complete 4 other ASA classes in the next year.

There is no holding James back. Keep sailing!

Taking it to a whole new level

George Rizkalla wasn’t sure what to expect when he signed up to attend the Warrior Sailing Basic Training Camp. Living in Los Angeles, he didn’t realize how close a sport like sailing is to where he lives.

George attended the Basic Training Camp in San Diego in June. From day one, he knew he wanted to continue sailing. On the last day, he was able to meet Marann from the Los Angeles Maritime Institute (LAMI), a tallship operator out of the Port of LA. Marann gave an overview of their services as well as the opportunities available at their operations.

The next weekend, George was there and graduated from their volunteer training. Now he is climbing to new heights, literally! This is Marann with George on the mast. Look who is sporting the Warrior Sailing gear! 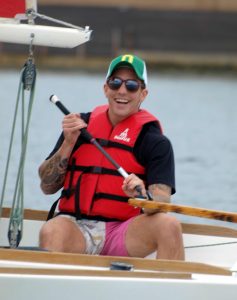 Becoming Part of the Crew

In 2016, Jordan Ohara graduated from the Warrior Sailing Basic Training Camp in San Diego. He had sailed before but not that much. When he heard about Warrior Sailing he was psyched to get back on a boat.

After graduating from training and with skills in hand, Jordan signed up for one of our Beyond Our Camp opportunities. It was the 2017 Southern California Yachting Association (SCYA) Midwinter event. Partnering up with San Diego Yacht Club, Warrior Sailing arranged for Warrior Sailors to crew aboard private boats for the regatta.

Jordan happened to be assigned to J120 CCRider owned by Chuck Nichols and Past Commodore Kyle Clark. Having sailed with them for the regatta, Jordan continued racing on CC Rider with the rest of the crew. This past spring, CCRider competed in the One Design Offshore Championship Regatta along the southern coast of California. It was Jordan’s first overnight while racing on a boat. Now, he is a regular member of the crew. 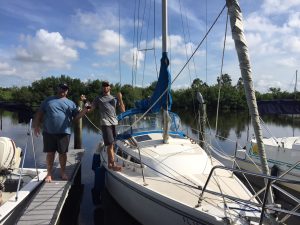 After learning to sail at the Warrior Sailing camps, Eric got hooked. He knew he wanted to continue to sail so he bought a Catalina 27′ boat in Cape Coral, FL. Living in Tampa, he turned to Nick, a fellow Warrior Sailor, and tricked him into coming along on an epic journey.

Below is a commentary from Eric:

“What followed can only be described as 40 hours of pure boredom interrupted by moments of sheer terror. The old and tattered genoa was shredded by high winds on our first ever overnight experience. Most of our lights were broken. We navigated channels. Encountered and survived a full blown storm of 30mph winds, rain and intense lighting all at night in Tampa Bay and spent a night anchored out after finding dirt at low tide.

But we made it!

Yeah we made mistakes, but that’s how you learn. There is no replacement for getting out there and just sailing. We learned more in those 40 hours than 5 years of videos and books would have taught us. Fear of the unknown is the greatest fear that there is, but that’s what changes you. Overcoming obstacles and putting yourself out there helps you connect better with yourself and those around you.

Special thanks to my sailing buddy, Nick, all the coaches who gave me the sailing bug and the skills and confidence to get on the water and my wife for supporting me throughout. I could not have done it without you.”

Learn more about how to Get Involved.