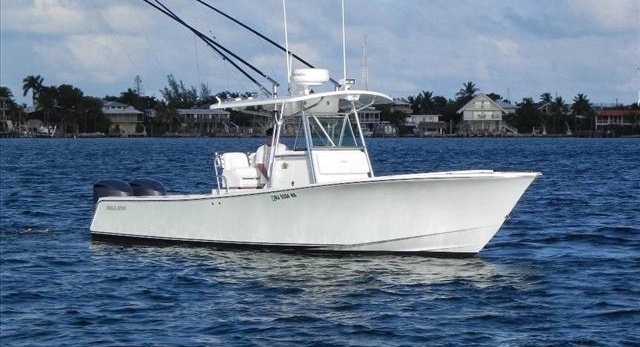 Training Vessel Veritas was donated to the USMMA Sailing Foundation in the fall of 2016. She immediately joined the Power Squadron at the U.S. Merchant Marine Academy and was crewed by midshipmen. As part of the Power Squadron, Veritas has already gotten underway over 50 times with an average crew of 7 midshipmen. This season Veritas has over 150 hours underway. The midshipmen crew has made training trips to Port Jefferson, Northport, Eaton’s Neck, Hempstead Harbor, Manhasset Bay, and 12 trips into New York Harbor. Along with training, Veritas has been used to transport Academy VIPs to and from Kings Point and has given VIP tours for New York Harbor and our surrounding waterways.

Veritas is a 2008 Custom Sport fishing boat that was built by Blackwater Boats and finished by Tidal Creek Boatworks. She Cruises at 28 knots and has two Yanmar diesel engines rated at 440hp each. With her exceptional seaworthiness and great maneuverability Veritas is a perfect boat for training midshipmen in boat handling, navigation and maritime safety.